The Census Data Proves Britain is not a Nation of Immigrants 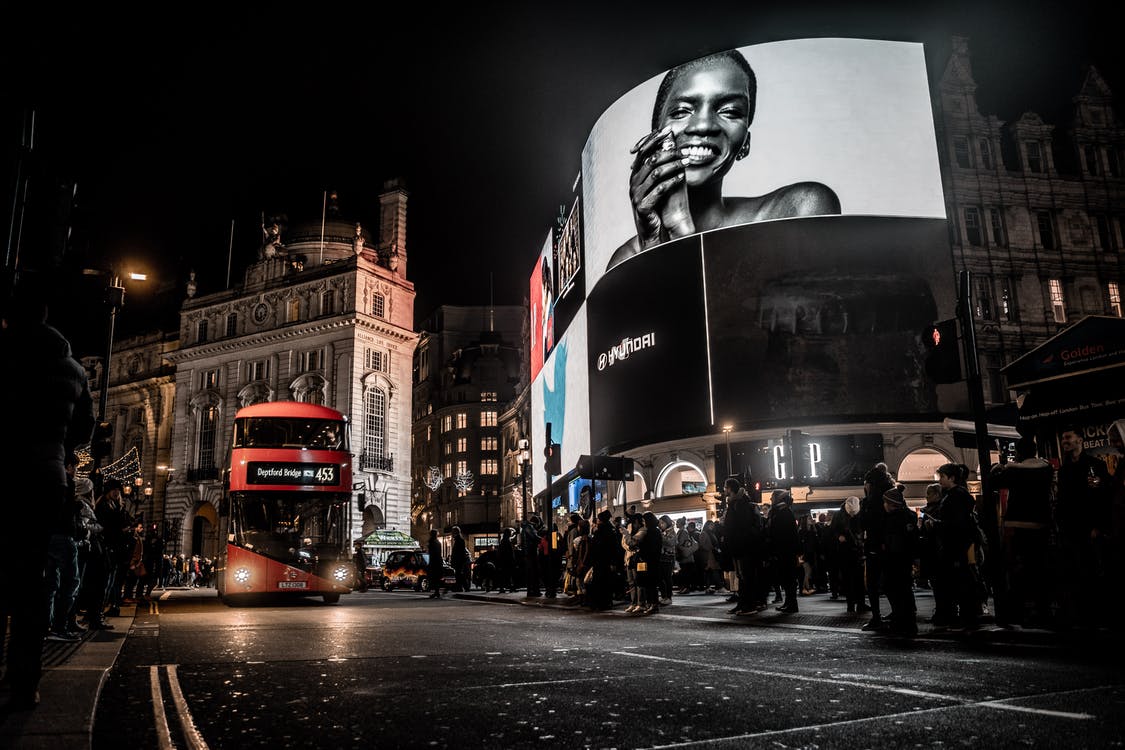 It is often wrongly said that “Britain is a nation of immigrants” and always has been. We can check the veracity of this statement by simply examining the publicly available census data.

The Office of National Statistics’ Nomis census database provides us with the following official figures for the population of Britain from 1961-2011. The 2021 census has not yet been released, but should be available later this year.

The data here is more granular. Commonwealth immigrants from Africa, the Caribbean, India, Pakistan, Bangladesh, and East Asia totalled 1.5 million, with Mediterranean, European, and Irish immigrants totalling 1.3 million. Migrants from other parts of the world totalled 461,000. This makes the total number of non-European/Mediterranean migrants in England and Wales approximately 2 million. Non-European/Mediterranean migrants therefore made up approximately 4 per cent of the population of England and Wales, with European migrants forming the remaining 2.6 per cent.

In 1991, the total population of England and Wales was 49.9 million. We can’t directly see how many European migrants are represented in this data, as Europeans at this time had been compressed into the ‘white’ ethnic category totalling 46.9 million. We can infer from this that European migrants made up around 2 million (which I shall assume for this analysis). Irish had a separate category, totalling 788,000. Non-European migrants totalled 2.95 million, making them 6.3 per cent of the total population of England and Wales, up 2.2 per cent from 1981.

The 2001 census revealed that, in England and Wales, the total population was 52 million, and of that, ‘white British’ made up 45.5 million, making the foreign population 6.5 million, more than double what it had been in 1991. Irish and European migrants accounted for nearly 2 million people, 600,000 mixed race people (who first appear on the census here), 2.2 million Indian, Pakistani and Bangladeshi combined, and just over 2 million black people of Caribbean, African and ‘other’ origin.

By 2011, the overall population of England and Wales had increased to 56 million, of which 45.1 million were indigenous ‘white British’, and over 3 million Irish, Gypsy or ‘other white’ (presumably European). Mixed ethnicity had risen to 1.2 million, and the category of Asian (Chinese, Indian, Bangladeshi, Pakistani and other Asian) had nearly doubled to 4.2 million. The black population had reduced to 1.9 million, and Arab and other ethnicities were recorded at approximately 600,000. The total number of foreigners was approximately 10.9 million, or 9.7 million if mixed-race people are not included in that total.

*Indirect data inferred from other statistics. 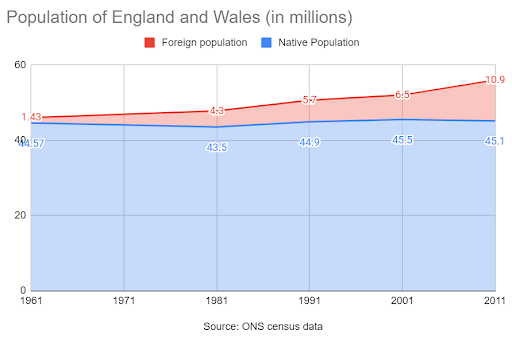 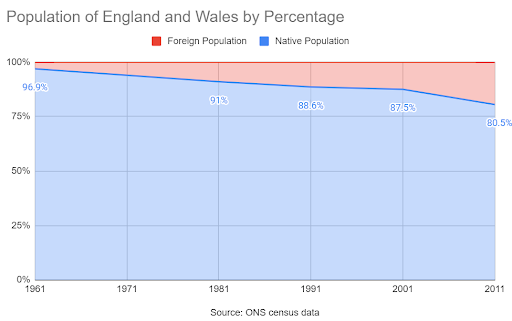 These estimates are almost certainly below the actual number of illegal immigrants, of course, as they only account for those people who have been detected; undetected migrants cannot be accounted for. When it comes to refugees the UK accepts, the Refugee Council puts the number of asylum applications by refugees at nearly 49,000 in the last twelve months. The UN Refugee Agency observes that this is 63 per cent higher than the previous year, and the highest number in the last twenty years.

The assertion that Britain is, and always has been, a “nation of immigrants” seems hard to sustain in the face of the above data. There is no reason to believe that, prior to 1961, Britain had a significant population of foreign-born people; it is likely to be a few percent of the total population in the early 20th Century, and probably dwindling to less than 1 per cent the further we go back into the 19th, 18th, and 17th Centuries.

The statement “a nation of immigrants” implies that the majority of the population are of an immigrant background, or that the non-immigrant population did not significantly contribute to a nation’s achievements. In the case of Britain, this is obviously not the case; the majority population by an overwhelming degree have always been indigenous and a cursory look through the history of England, Wales, and Scotland shows a great deal of native activity and accomplishments too great to list here.

This is not, of course, to say that Britain has had no immigrant population for any significant amount of time. From its inception, Britain as a political entity was a world empire and grew to be the largest empire in human history. It is to be expected that a certain percentage of foreigners would come to live in the capital of such a political construct. However, there is currently a push to misrepresent this very small number of foreigners in order to marginalise the existence and needs of the overwhelming majority of native inhabitants. This seems to be done to further justify the exorbitantly high levels of mass immigration that Britain is experiencing, in order to frame it as a concrete historical phenomenon and nothing out of the ordinary.

However, the data we have available demonstrates that this is very much out of the ordinary for most of the history of the United Kingdom. If mass immigration into Britain is to be considered as a historical phenomenon, it can be firmly characterised as a phenomenon of the late 20th and early 21st Century so far. In 1960, the foreign population was one out of every 32 people, and by the census of 2011, almost one in five people were of foreign descent. This level of foreign presence in England and Wales is very new and not characteristic of the historical experience of Britain, despite small numbers of immigrants occupying small districts of major cities.

An analysis of the 1991 census data by the London School of Economics described the effect as such:

These enclaves of foreign migrants did not spread out evenly among the English and Welsh natives of the country and formed what are tantamount to colonies. This was not such an issue when the total number of migrant colonies was quite low; they were novel, interesting and unthreatening. However it takes on a new aspect when it becomes apparent that England’s major cities have become majority non-English. As actor John Cleese put it, London no longer resembles an English city, and this is because of the rapid localised growth of the immigrant population combined with no external pressure for them to integrate into English culture. It is likely that the 2021 census will reveal that other cities across England and Wales will also be majority non-native as well.

Given how immigrants to Britain tend to cluster in certain areas, we can calculate the rough population increase we can expect in the 2021 census. According to the Oxford Migration Observatory, the average net migration to the UK between 2011 and 2019 was 251,000 people per year. If we assume that average for 2020 and 2021, then we get a total of 2.51 million new migrants for the decade ending in 2021. This would put the total number of foreigners living in England and Wales at around 13.4 million of a total population of 58.5 million, assuming the overwhelming majority of those did not move to Scotland. This would make the foreign population of England and Wales approximately 23 per cent, up 4 per cent from 2011, and centralised mostly in cities with existing substantial immigrant populations. Including estimates of illegal immigration, it is conceivable that somewhere in the region of 25 per cent of the population of England and Wales is now foreign. Moreover, if trends continue as they have been, there is no reason to think that millions more foreigners will not settle in Britain, concentrated around the immigrant colonies that already exist.

The construction of foreign institutions, the replication of foreign traditions, and the replacement of the English language will be produced by these immigrant colonies. The longer this goes on, the more rooted these colonies will become and the more difficult it will be to undo them. This should be a concern to any anti-colonial efforts that are undergone by activists in the public sphere; every culture should be given adequate room to replicate and govern itself, and the nation state seems to be the ideal vehicle for this state of affairs. Given how migrants to the UK have come from nation states of their own, it seems reasonable for the indigenous population of Britain to control the number of foreigners that live in their country, something that each UK government has failed to do for several decades now, and shows little inclination to take seriously as policy.

Britain is not a “nation of immigrants,” it is demonstrable that the British Isles has been inhabited for millennia by ancient and settled population groups, with waves of migrants coming infrequently, often with hundreds of years separating each group, and these groups coming almost exclusively from Europe. Mass immigration is a very recent phenomenon and is dramatically impacting British society; it is not how things have always been.